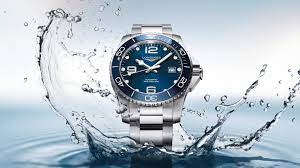 Auguste Agassiz, a Swiss watchmaker and the brother of biologist Louis Agassiz, established Longines in Saint-Imier in 1832. Auguste co-founded the firm with two partners, Henri Raiguel and Florian Morel, and it was formerly known as Raiguel Jeune & Cie. Longines was known for the quality and precision of its timepieces by 1880.

Longines is the company with the oldest logo which is the easily recognizable winged hourglass logo in the world of watchmaking, in addition to numerous horological advances that are always packed in elegant and high-performing products. For many people, this watchmaker’s first association is with sports, particularly the Olympic Games, or with some of its successful ambassadors. Here’s a list of incredible Longines watches for sports enthusiasts.

One of the incredible Longines watches for sports enthusiasts is Longines Conquest 1/100th Roland Garros Watch. For the eighth year in a row, Longines is the official timekeeper at Roland Garros. Longines launched a new watch called Conquest 1/100th Roland Garros to commemorate another successful partnership with the world’s most important tennis tournament. It is a timepiece with an accurate quartz caliber and a chronograph that shares the same characteristics as other pieces released by the brand for the various sporting events it sponsors. It is housed in small stainless steel housing. Its diameter is only 41mm, which is quite small when compared to current trends. This back section is screw-in, and the design also contains a screw-in crown with protective shoulder and a sapphire crystal with double glare-proofed coating.

Read More:   Why Choose an Integrated POS Machine for Your Grocery Store?

The watch’s water resistance is quite impressive due to the way it was constructed. The watch is resistant to water pressures at depths of up to 300 meters (990 feet). It has an anthracite dial with a single Arabic numeral applied at the very top. There are 11 more appliqués used for hour markers, all of which are coated with luminous matter to improve legibility. There are three sub-counters on the face. The top two are used to calculate the chronograph feature’s elapsed time. The right one has a 30-minute subdial, while the left one has a 12-hour division. Small seconds are handled by the third counter at the bottom of the face. Multiple intermediate times can also be displayed on the chronograph. All of this is made possible by the L440 movement. It is a modern quartz caliber created for the brand by ETA.

Longines has released the Conquest 1/100th Alpine Skiing piece to commemorate the start of the 2014/2015 FIS Alpine Skiing season. This watch has a black dial with a sunray motif. It has a stainless steel case and a bracelet made of the same material. The piece’s diameter is 41 mm, which is considered medium. In terms of operation, it is based on the L440 quartz movement, which was developed and manufactured by ETA.

Its most important feature is that it allows for an extremely precise three-counters chronograph. It can measure results down to 1/100th of a second, as required by sport regulations. This stylish watch is primarily aimed at ski professionals and enthusiasts who will be able to keep track of their results with pinpoint accuracy. They will also be able to measure intermediate times and analyze their performance at each level of a ski track.

Read More:   5 Reasons to Have Integrated Payment Solutions in Restaurants

The watch is fancifully termed Twenty-Four Hour Single Push-Piece Chronograph, and the name itself denotes the majority of the watch’s basic characteristics. The latest Longines model, with a rather large diameter and a steel housing, will be available with either silver or a black dial. The “Twenty-Four Hour” part derives from the fact that the model with aviation heritage has a dial with a 24-hour format rather than the standard one with 12 segments. The hour scale has been shifted closer to the center, so that the hour hand points directly to the appropriate numeral. The minute scale, which corresponds to a longer minute hand, is located on the dial’s rim.

It has a monopoussoir chronograph that is regulated entirely by a single push-piece housed inside its larger onion-shaped crown. Because the stop-maximum watch’s elapsed time is limited to 60 seconds, it is displayed entirely with the central hand and a counter-weight. It is housed in a round steel housing with a large diameter of 47.5 mm. The sapphire crystal on the front is glare-proofed, and the case-back is solid steel with the company logo engraved on it. Its construction ensures basic waterproofness to a depth of 30 meters. The innovative watch is powered by a self-winding mechanical movement with a column-wheel chronograph. This Longines-exclusive movement was created using the ETA A08.L21 caliber.

Conquest 24 Hours watch, the first product in the Conquest sub-collection to include a second time zone complication. The time in the second time zone is displayed in 24-hour format, as implied by the product’s name, and with the use of a marked central red hand with an arrow-shaped tip. The watch was created as a pilot’s tool because it has a 24-hour display of the second time zone, making it easier to cross to a different time zone regardless of direction. It has a distinct high-end appearance that can be associated with the golden age of aviation, when flying was considered a sign of luxury and class.

It comes in a sturdy package, with a 41 mm wide round steel case (with a screw-in back and a screw-in crown with protection) and a three-link steel bracelet (with the thickest central row). The dial comes in three classic colors: black, silvered, and blue, and it is dominated by two Roman numerals, a 24-hour scale, and a red hand attached to it. Hands, numerals, and indices are coated with luminescent SuperLuminova material for increased visibility. The watch has a minute scale on the flange, a date aperture, and a sapphire crystal with a glare-proof coating on the underside to protect the dial. It has a self-winding L704.2 caliber inside the round case (base movement ETA A07 171).

Longines is well-known for its rich history, craftsmanship, and high-quality luxury timepieces. Longines watches come in a variety of styles that are suitable for sports enthusiasts. They certainly provide excellent features at a fraction of the cost of many other watchmakers with comparable or similar features.

7 Tips to for Motorsports Racing